The main tourist attraction of Lake Vivi is its southeastern shore, where the geographical centre of the Russian Federation is located

17.05.2022 // Lake Vivi is one of the main natural attractions of Evenkia, which became part of the Krasnoyarsk Territory in 2007. This is where the official geographical centre of Russia is located. 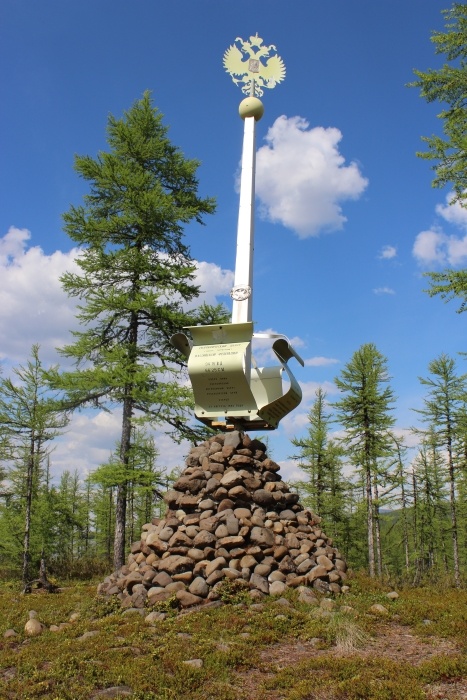 Lake Vivi in the Evenki District of the Krasnoyarsk Territory has the official status of the geographical centre of Russia. More precisely, it is its southeastern shore with coordinates 66°25′ north latitude and 94°15′ east longitude.

The official geographical centre of Russia

The coordinates of the country's centre were calculated in 1992 by engineer and physicist Peter Bakut, who was one of the pioneers of statistical radiolocation. This science allows one to determine the latitude, longitude and characteristics of an object using radio waves. A special formula was used to obtain the necessary information, which was then confirmed by the Federal Service of Geodesy and Cartography (Roskartography). Since then, Lake Vivi gained the official status of the central point of Russia.

In the same 1992, a scientific and sports expedition headed to Lake Vivi. Its members erected a memorial on the southeast bank of the river about 7 metres high, and not far from it is a wooden chapel of St. Sergius of Radonezh.

In 2014, as Crimea became part of Russia, the central point of the country moved again, although only by a few dozen metres to the south. New coordinates were calculated and the cross was placed according to them — a marker indicating the exact location of the heart of the country.

'Evenki Baikal' and other Vivi titles

Lake Vivi has quite a few titles — mostly unofficial ones. For instance, it is called the 'Evenki Baikal'. And indeed, it is the largest freshwater lake in the Evenk Autonomous Okrug, with an area of 229 square kilometres. Its elongated shape also resembles Lake Baikal: the length of the lake is 90 km, and the width reaches at most 4 km. Thirty-three rivers flow into the lake, with only one of them — the lake's namesake — flowing outwards. The Vivi River is a tributary of the Lower Tunguska and belongs to the Yenisei basin.

Lake Vivi is also referred to as as 'the kingdom of water', 'the land of waterfalls', 'the land of wild animals, birds and fish'. The lake is unique in the species composition of its inhabitants: here, you can find grayling, huge char, whitefish, taimen and many others. Animal tracks in the areas surrounding the lake can be found much more often than human ones.

The easiest way to get to Lake Vivi is with a tour group. There is a wide variety of excursions to choose from, ranging from rafting to fishing and sightseeing trips.

It should be noted that, since 2021, Lake Vivi has been assigned the status of state nature reserve of regional significance.

Arkhangelsk Oblast The Most Beautiful Village in Russia

Chukotka Autonomous Okrug The easternmost point of Russia and Eurasia