08.11.2021 // Snowkiting is a relatively new sport, but it has already become very popular. The name is rather self-explanatory: you basically use a kite to ride across snow. It involves snowboarding or alpine skiing with a parachute. Snow and wind are the only requirements. Both can be easily found in the Arctic regions of Russia. The skiing season is rather long — it normally begins in December and lasts until the end of April.

Snowkiting originated in the German Alps in the 1970s. It was invented as a result of Dieter Strazilla's experiments. People quickly figured out the benefits of this sport and learnt to appreciate them. It doesn't require ski elevators or high mountains. Basically, all you need is some equipment, wind and either snow-covered surfaces or a stable ice surface without cracks, grooves or holes.

Snowkiting is one of the 'smart' sports — you have to consider the strength of the wind and be able to adjust to its direction. As is the case with skiing, it's important to move while keeping the correct posture and not to put pressure on the front edge, because otherwise the board or skis will get stuck under the snow.

If you are experienced in snowboarding, windsurfing or yachting, you will likely be able to grasp the fine details of snowkiting rather fast, but, in order to avoid injuries, it would be best to have an instructor accompany you for the first couple of runs. 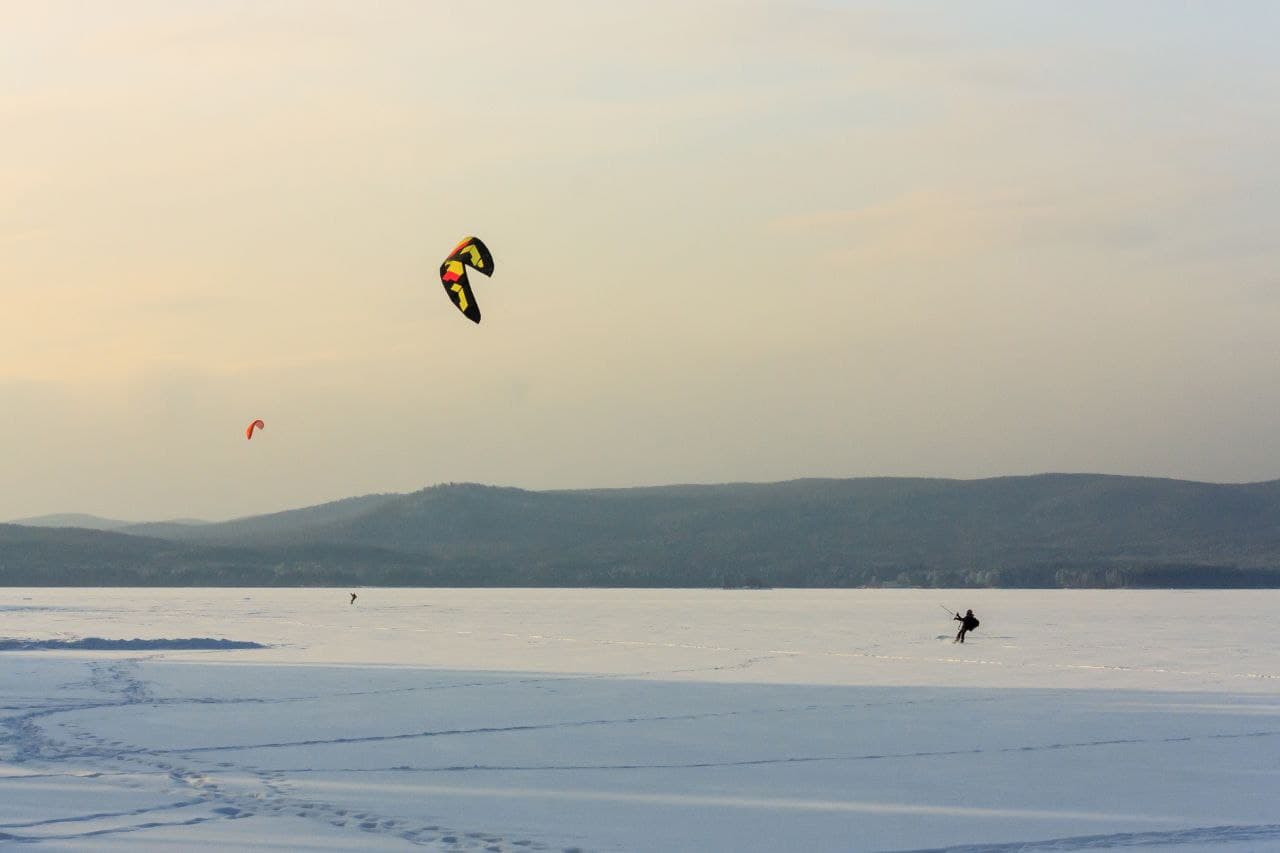 The tundra is the most suitable place for newcomers to practise snowkiting. It consists of wide, open surfaces almost devoid of vegetation and the snow is practically everywhere as far as the eye can see. The fields are flat and can be used to practise speed racing, while the hills and mountains are perfect for learning how to jump and perform other snowkiting tricks.

In terms of terrain, the Murmansk region can be considered the ideal place to practice snowkiting. Typically, the skiing season there opens in late November — the first half of December. In recent years, a large number of locations where you can learn how to snowkite have appeared in the region. The main kiting spots are located in Murmansk, Kirovsk and Monchegorsk, as well as Teriberka and Tumanny settlements.

You have a number of possible ways to go about learning how to snowkite. One of them is taking a course at a specialised school. You will have to cover the cost of instructor-led classes, as well as the cost of rental in case you don't have the right equipment.
A specialised school in Monchegorsk will charge you about RUB 3,600 per day for equipment rental and RUB 29,000 for 10 hours of private lessons with an instructor.

If you can bring a small group of people, however, the cost of the training course will be lower.

Training usually consists of three stages. The first stage is a basic introduction to safety and piloting skills, the second stage is learning to use these skills automatically, with the student trying to take charge of the process, combining control of the kite and snowboard. The third stage is the honing of these skills.

Another option for becoming a snowkiter is to order a ready-made tour. Taking this approach will allow you to save some money on training since you will be a part of a group together with several other participants. Therefore, the cost of training per person will be lower than it is for private lessons. In addition to that, you don't have to worry about booking accommodation or dealing with any other organisational issues of the trip.

Teriberka, located 120 km from Murmansk, has recently become a tourist hotspot for snowkiting learning tours. If you are afraid of the cold and polar nights in the Murmansk region, you can book a tour in the spring. Group tours for the period of March–April of 2022 are currently available at travel agencies.

To conquer the ocean

Teriberka is the right place for those who wish to try going on unusual routes, such as, for example, to the coast of the Arctic Ocean. A week-long tour consisting of 'all inclusive' ocean kiting (including food, accommodation, lessons and equipment rental, but not travelling to Murmansk) will cost about RUB 70,000–90,000 per person.

'Snowkiting has been a popular recreational activity in the Murmansk region for many years. Many clubs that work close to warm seas in summer come to the region in winter and conduct winter classes for both beginners and those who are already confident in their kiteboarding skills,' said Alexander Eliseev, head of the Committee on Tourism of the Murmansk region, told Arctic Russia.

The Murmansk region isn't the only place in the Arctic where people practise snowkiting. The Arkhangelsk region is also perfect for this sport: the winters there are long, the landscapes are beautiful, and the wind is just right. In Arkhangelsk, the initial 6 hour–long course will cost RUB 10,000, while the course for advanced kiters (15 hours of kiting) will cost RUB 25,000. These prices include the instructor's services as well as the kite rental (without skis/snowboard).

If you already consider yourself to be a snowkiting master, you can try participating in competition events. Most of themare held in the spring. The end of March, for example, is when winter windsurfing and snowkiting fans gather in Arkhangelsk to compete against each other. In early April, competitions are held in Yamal in the village of Yar-Sale. During these competitions, professional snowkitiers give a series of masterclasses on snowkiting and freestyle demonstrations. Amateur snowkiters can also participate in a mass start.

Nenets Autonomous Okrug The Pristine Beauty of the Far North