Solovki. Islands of joy and anguish

Walking, cycling and boating in search of the treasures of the Solovetsky archipelago, or simply Solovki
6 days 133 km 7 objects

Solovki, located 165 kilometres beyond the Arctic circle, is the largest archipelago in the White Sea. These islands are a part of the Far North region and a part of the Russian Arctic zone. Untarnished nature, Orthodox Christian holy sites and centuries of history attract hundreds of tourists to the islands every year. In 1992, the cultural and historical complex on the Solovetsky archipelago was introduced into the UNESCO World Heritage List. A brief tour of the main places of interest will take at least three days, and a fully immersive experience will take no less than two weeks.

How to get there

In summer, most tourists and pilgrims arrive at Solovki by ship. They depart from Kem and Belomorsk, with the journey taking 2.5 and 4 hours respectively. Ships sail here from Arkhangelsk as well, but you would have to spend almost a full day en route. You will have to purchase your tickets in advance. Pre-orders start 90 days ahead of the departure, and you will need a passport to board the ship. Cruise liners sail to Solovki from Moscow and St. Petersburg, but the journey will take 10 to 15 days. There are no sailings in winter, and the only way to get to the islands is by plane from Arkhangelsk. Several flights depart from there every week.

The end of June to the end of August is the most popular time for a visit to the islands. Most of the places of interest are also open for business during late spring and early autumn, but it's quite troublesome to get to them once it starts snowing. There are no road services on Solovki.

What to wear and what to take with you

Even though Solovki is a popular tourist destination, there is no tourism infrastructure here, which means that you will have to carefully prepare for the trip beforehand. The nights on the islands are cold even in summer, so think carefully before you plan to spend a night in a tent. The unique climate of the area should also be taken into account when considering what you should wear. There are only 4 shops on the islands and they mostly sell groceries and essential goods. Bring enough cash for your trip because you won't find any ATMs here.

The Solovetsky Monastery is a popular destination for all pilgrims visiting Solovki, and one of the main places of interest on Bolshoy Solovetsky Island. It is believed to be founded by the Orthodox Christian ascetics Zosima, Sabbatius and Herman who settled on this uninhabited island off the shore of the White Sea in the 15th century to lead a life of prayerful solitude. The main temple of the monastery was founded in 1558. Since then, the temple and its flock have encountered their fair share of trials and tribulations. The monastery was converted into a Gulag camp, and then into a special purpose prison. In the 1930s, Solovki became a place to which people were sent and executed en masse by firing squad. The monastery building itself was demolished and looted. Restoration of the monastery began in 1990, and eight years later the islands were granted the status of federal museum-reserve. 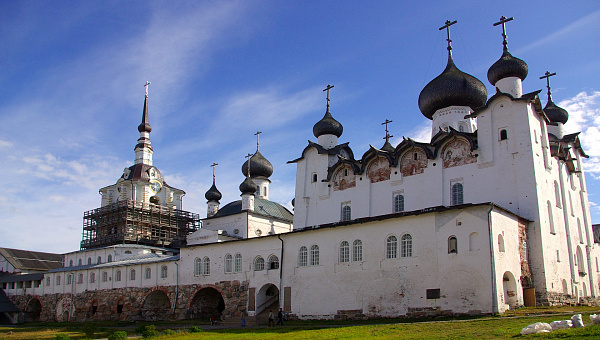 The museum-reserve was founded on the grounds of Solovetsky monastery in 1967 as a division of the Arkhangelsk Regional History Museum, but it has gradually become an independent institution and one of the largest museum-reserves in the country. There are over 1000 cultural heritage sites dating from deep into ancient history to the present day scattered across the territory. In the museum buildings, the results of excavations are presented alongside artifacts from the Solovki Gulag camp, archival photographs, and maps. 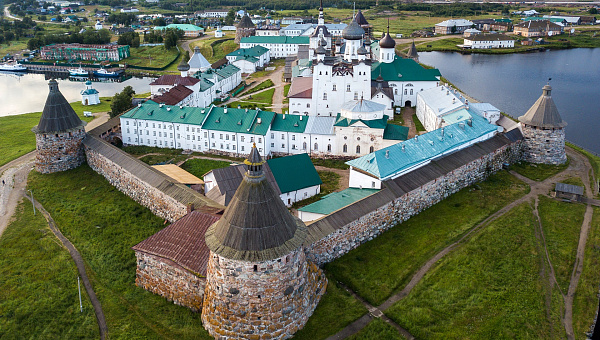 The Botanical Garden of the Solovki Museum-Reserve in Makarievskaya Pustyn is a monument to human diligence. Even in the Far-Northern environment, the monks have managed to grow southern plants and flowers here. Shortly before the tragic events of 1920, there were gardens, vegetable patches, and greenhouses with melons and watermelons on Bolshoy Solovetsky Island. The botanical garden has now been restored, and hundreds of plants that are completely atypical for these northern lands can be found here. 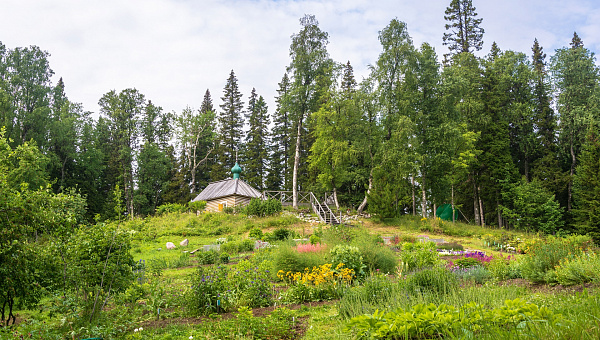 In the west of Bolshoy Solovetsky Island, there is a cape around which white beluga whales can be spotted if the weather is nice. These animals sometimes come very near to the coast, and sometimes even approach the boats. If you come to the cape before the tide comes in, you are almost guaranteed to see belugas. The tide schedule is available at the tourist information centre. You can get to the cape by foot: the trail goes through marshy forests, so it's best to wear high boots on your way there. 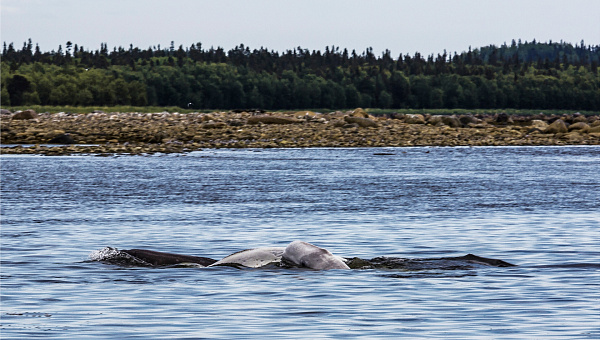 Between Bolshoy Solovetsky and the neighbouring island of Bolshaya Muksalma there is a giant dam that monks and hired workers built from boulders back in 16th century. It's more than one kilometre long, and it can be reached 20 kilometres from the township of Solovetsky. The dam can be reached by bicycle, but keep in mind that the road sinks into the marshes that can be very hard to get through. The dam is broad but winding because it was constructed along the shallowest route between two islands. You can also reach the dam by speedboat as a part of a tour. 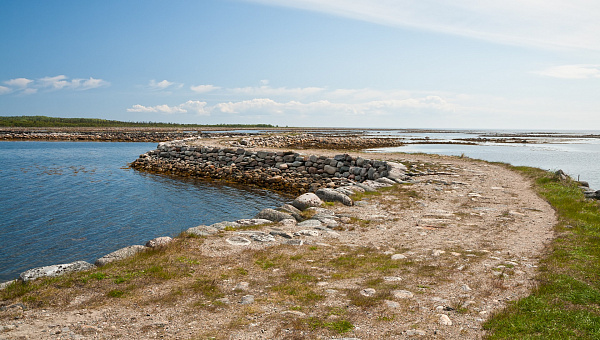 A famous monastic hermitage is located on one of the most remote islands of the Solovetsky archipelago — Anzer. You can only reach the island as part of an organised group of pilgrims with a blessing from the abbot of the monastery. The trip aboard the speedboat takes about two hours. The highest mountain of the Solovki is located on Anzer¬—Mt. Golgotha. In the early 2000s, monks started living in the hermitage again. During the cold season, the island is almost completely cut off from the mainland. The monks spend that time in complete solitude. Back when the Gulag camp was active, the sick and elderly convicts were sent to Anzer. During one typhus epidemic, almost a thousand people perished there. At the foot of the mountain, where the executed monks and convicts were buried, there grows a cross-shaped birch tree. 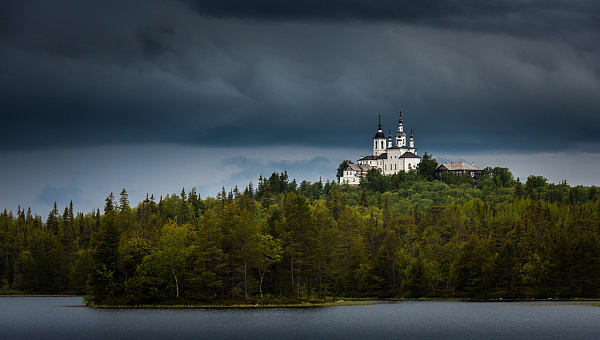 Tourists come to Bolshoy Zayatsky Island to see peculiar stone labyrinths that are several thousand years old. Scientists have formulated multiple hypotheses about the origins of these objects and their purpose. Nevertheless, the lack of credible data is not in any way detrimental to the natural beauty of the island and its stony bay. An infamous site of punitive solitary confinement for women and an ancient wooden church dedicated to St. Andrew the First-Called are located on the island. Bolshoy Zayatsky and Maliy Zayatsky islands are just five kilometres away from Bolshoy Solovetsky Island, and you can reach them as a part of a tour aboard a speedboat. 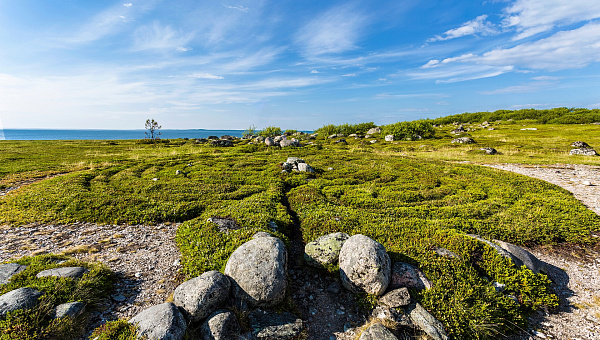